The original was a corker, the follow up fishing fellow wasn’t so good.

So we now have a new mega ad – The epic 90 second version of Into the Woods went live on Facebook and YouTube, on October 5th. Stage two is the 30-second pre-launch teaser on prime time TV, October 7th, and 8th, supported by movie listings advertising across News Limited publications. Campaign climax happens mid-October when the 60, 45 and 30-second films go to air on television and cinema screens across Australia.

So all that said and done, is it any good?

I think it lacks the creative impact of the original. This had a cracking creative idea, based around a product truth and packaged up beautifully with a clever bit of humour:

The new version seems to take the premise of “enduring the best” (which was most likely a reverse engineered / post rationalised proposition) and stretched it a bit too far.

More of a story than an ad based on a product truth and a continuation of the creative campaign.

Campaigns are precious things that need to have clear direction and it seems that John West might have lost their mojo in chasing the salmon in this one.

Despite all that, the idea of enduring the worst to bring you the best is solid. A John West Facebook page provides an interactive platform where consumers are encouraged to be their best by sharing their achievements and getting a taste of the epic adventures of others.

But as always, the adventures that John West presents in ads have to remain as relevant, motivating and interesting as possible. Having created some great work, they have a tough job to beat it.

It is all too rare to see an arresting ad that has this sort of impact with a precisely targeted group.

If you didn’t know what was coming (as most viewers don’t on Nickie’s site), the impact is phenomenal.

The genius in this ad is to get the creative idea beautifully executed and placed in the most relevant, well targeted place possible – Nickie de Jagger’s YouTube site.

This is VW creating a relevant and motivating connection with drivers.

VW are one of the most impressive companies at this sort of big idea based advertising. A few classic examples:

Thanks to Gruen for getting this one on-air.

It was bound to happen given the earnest nature of the initial Toni Collette effort.

A bit cheeky, but fun for a tactical moment.

The bank is now investigating whether the parody breaches its intellectual property rights. You would not want to get into a legal battle with these billionaire bankers.

The parody has now been removed courtesy of Commbank.

The new campaign is out.

There are a few 15 and 30 second spots coming out and I think this one is the best of the bunch.

A bit more in keeping with the previous work ‘The Man Your Man Could Smell Like‘, which was created by Wieden + Kennedy.

Here are the other two:

Good to see the evolution of the work and very hard to hit the highs of the original.

The LEGO design team are at it again. When they aren’t designing forests in the Australian outback, or producing feature length movies that is.

The company is proud enough (and confident enough) in its designers to allow them some video time to introduce their creations.

The first one I saw was for the exceptional 1962 VW Combi Campervan. The natural enthusiasm of the unscripted monologue from a young designer is infectious.

This example is for their new Haunted House which will be available in September 2012. The designer is clearly a Munsters fan.

What a huge compliment to the designers that they are allowed to release their creations to the public and trade in this way. Their amateur efforts are truthful and completely engaging. They leave you with a memorable impression of the model, its key features and how it came into being. Great examples of “re-used” parts from other kits feature throughout.

The Haunted House is part of the new Monster Fighters line.

I features all of the classic movie monsters (vampires, werewolves, zombies, etc.) against a collection of Victorian-inspired steampunk heroes, led by Dr. Rodney Rathbone, in a quest to obtain the full set of “Moonstones” – which are required to take over the world. 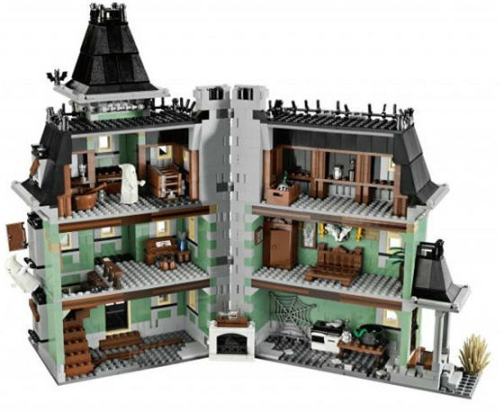 The Haunted House has over 2,000 finger numbing pieces to build the gate, porch, fireplace, kitchen, office, attic, bedroom, potion room and music room, and will sell for $180 for which you get:

I used to work in the toy industry. This LEGO stroke of genius in allowing designers to spruke their wares on-line is the equivalent of us (way back in the day…) getting the designers in front of key retail buyers.

This was always the most effective way to sell toys and LEGO have uniquely embraced this through today’s technology and the social media fascination in the very flexible Billund brick brand.

Here is a US ad that has over 4 million views on YouTube.

Many will have participated in the website by sending “Mom” a message of thanks at: http://www.facebook.com/thankyoumom

It was mentioned by BBH’s John Hegarty at Cannes this year in his light-hearted session with Dan Wieden.

Being a fan of BBH, I keep an eye on his comments from Cannes and particularly liked his blunt assessment of much of the work he sees.

This P&G ad is treading familiar, but tricky emotive ground. The old “mom got me here through her dedication to supporting my sport” and presumably cleaning the kit with P&G product. It has been done before in relation to cleaning products, but this certainly isn’t about getting the grime out of the muddy shorts and sweatshirt sort of stuff.

Getting the emotional tone right in an ad is a very hard thing to do.

There was a brilliant P&G Pampers ad that got it right for parents.

On this P&G Olympics ad Hegarty said in conversation with Dan:

“If I had been passed that script and read it I might have vomited. The vomit factor was high if you got it wrong, but you really made it work.
“You have to make sure that the emotions are relevant. It really could have backfired on this.”

Yet again John reverts to the basic principle of relevance to prove the point.

The relevance of this ad to the journey, people and products is there and it is a truly inspiring ad for that reason. Consumers are savvy enough to recognise P&G’s involvement in this journey without seeing too many tubs and tumble dryers.

When I was lucky enough to work at BBH, John said that all advertising strategy needed to be “relevant, interesting and motivating”. I’ve stuck by this and found it to be the best test of a creative idea.

I’ve often eulogized the Nike work. Their access to and use of stars is often exemplary, but does this one go too far?

It is a promo that invites you into an interactive on-line opportunity to “find out what it takes”.

All very slick as you would expect, but is it too much?

With a wealth of talent at their disposal, everyone is in this spot Neymar, M’Vila, Götze, Ribéry, Sneijder, Ronaldo to name a few. Even Lebron James is crammed in there!

A case of not seeing the wood for the trees and not getting the best value out of priceless talent?

Obviously Nike and football have moved onto the global stage, but I still prefer some of the more tailored work – any excuse to show Park Life again: